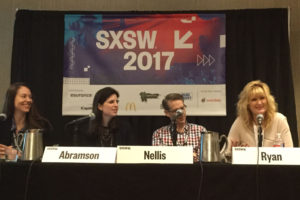 “Pam Ryan is an innovative pioneer in helping to create different visions for our future and encouraging individuals, businesses, and governments to act on these visions now, so that we can meet the social and environmental challenges that face us.”

When Australia contemplated its constitutional future — whether to remain a constitutional monarchy with the Queen of England as the Australian Head of State or become a republic with an appointed Australian Head of State — Dr. Ryan led the design and staging of Australia’s first Deliberative Poll, just two weeks prior to the national referendum on the issue. This first ever representative gathering of Australian citizens at Parliament House in Australia’s capital, Canberra, was televised live on national public television with national public radio doing live simulcasts. 60 Minutes televised a special session and BBC World broadcast a program covering the proceedings to over 160 countries.

“We welcome this initiative…given the distinction of Pam Ryan and Jim Fishkin, and the others who put this together…[a national dialogue] conducted in an open, candid and responsible fashion, not sensationalized.”

Dr. Ryan led teams of facilitators and project managers to design, plan and implement the Economic Growth Summit for South Australia. Convened in 2003, set in 2013, this initiative was the first massive strategic experiential futures planning exercise of its kind in the world. Using a “future perfect” scenario planning framework, Pamela led some 50+ paid and volunteer team members — including moderators former Prime Minister Bob Hawke, and Speaker of the House Ian Sinclair — in three days of future perfect deliberations with South Australia’s top decision makers. Harnessing the skills of some of Australia’s leading thinkers and doers, Pamela coordinated task forces of top economic experts and filmmakers, including Director Scott Hicks, for the development of futures scenarios and creating the futures alternative experiences. Dr. Ryan personally trained all facilitators and managers of deliberation groups in future perfect strategic planning processes.

“If anyone can lead the way to transform our future in an enlightened manner, it is that irresistible force of nature that is Dr. Pam Ryan, whom we first met when she designed Alternative Futures for the Economic Development Board in South Australia.”

When South Australia was again contemplating its economic future, Dr. Ryan advised the South Australian government on building innovation and venture capital ecosystems for more sustainable futures for the state. Drawing on cutting edge research from around the world on the characteristics of VC firms/funds for optimal success, Dr. Ryan explored the critical components of innovation, entrepreneurial and investment ecosystems, along with learnings from other cities around the world (particularly Austin, Texas). She reported proven ingredients for success of each component of any innovation, entrepreneurial and capital ecosystem and the inter-relationships among them, resulting in specific recommendations to enhance South Australia’s future.

When the Tingari Group, especially the Tingari-Silverton Foundation, contemplated its own future, it embarked on what would become a massive research journey into the future of social entrepreneurship. Initially in collaboration with the Institute For The Future (IFTF), the project resulted in consultations with over 130 changemakers in the burgeoning impact innovation, entrepreneurship and investment space. The research processes involved a futures thinking paradigm and resulted in presentation of results at various academic and practitioner forums around the world including Oxford University’s international conferences on social entrepreneurship and impact investing, and SXSW in Austin, Texas. Changemakers consulted are at the leading edge of the world-wide “surge in purpose” and hail from around the globe: from New York to Sydney, London to Johannesburg, Santiago to Mumbai, Toronto to Istanbul, Mexico City to Paris. Their impacts range from revolutionizing how vaccines are delivered or how crops are stored and distributed, to creating a cadre of individuals and teams enacting change for good.